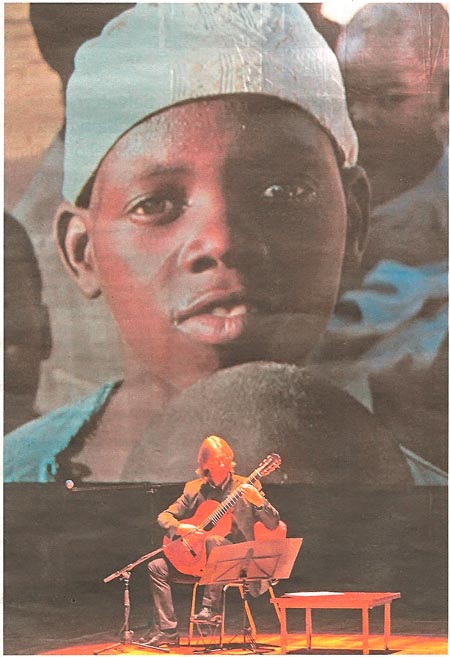 There is no way around it: David Russell is one of the great music performers of the world. He is a highly acclaimed concert player, the best guitarist in the world. I don't affirm it, I reaffirm it. Excuse me for so much certainty. But it is not only his high technical level, it is that this musician, eternally young, incarnates to perfection any ideology that a philosopher would seek to express the balance of the souls through music.
The best phrase of the night was said by Russell: "I know that here, close by, there are people suffering a lot, going through hard times, but today it is the turn to help villages in a far away land, who don't have water". He demonstrated the most pure exercise of solidarity with sincere simplicity. Emotionally moved with the sold out theatre of the Centro Cultural Novacaixagalicia, he offered a recital of music, humanity and humility. The project of wells for water in Mayo Rey, in Cameroon was an extraordinary excuse for Russell to perform in Vigo and thus show the titanic work that the NGO is doing and our city is participating in this with the best of wills.
Behind a great person there is another great person, in this case David's wife, guitarist María Jesús, absolute accomplice of any mission in their lives.
On a simple stage with projections of images of the project of wells for water in Mayo Rey, David Russell started his recital with a clear homage to Spanish music. His impeccable sound, his extraordinary musicality bathed with pure magic the austere staging. The naked truth, only the music, which was the star, there were no limits. Only going beyond the lines of perfection. Is there perfection with Russell? No, just music in a pure state. One of the most brilliant moments of his interpretation was the impeccable rendering of the enigmatic Baroque composer Silvius Leopold Weiss. The profound interpretation of this author was memorable, a prodigious technical discourse. Other than any concept, it was the extraordinary musicality of the Scottish guitarist, always attached to the emotion of the audience, without concessions, without mercy. Total enthusiasm, total service to the music: grandiose. Because of that, the world surrenders at his feet as does the city of Vigo...
Roberto Relova 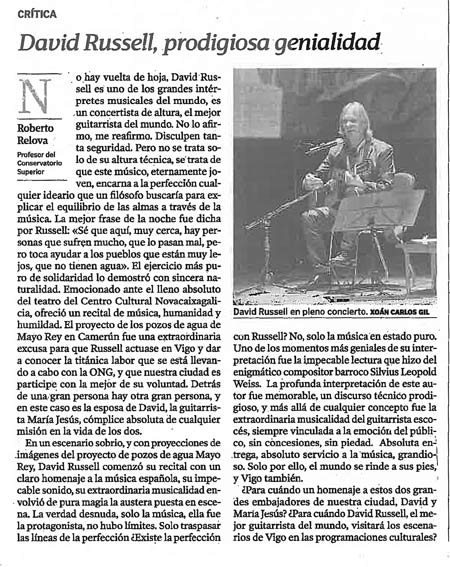