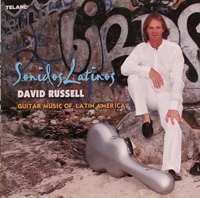 The guitar is the soul of Spanish music, and it was inevitably brought to the New World by the Spanish conquistadors and colonists beginning in the 16th century. The instrument became an integral part of musical life in Latin America, and is the medium through which some of the region’s finest composers have expressed their most characteristic musical thoughts. This Telarc recital by David Russell presents the works of four Latin American masters of the guitar.
One of the great pioneers of classical guitar, Augustín Barrios Mangoré was one of the first Latin American guitarists to appear successfully in Europe and one of the first guitarists to record. Honing his chops by transcribing works by Bach, Beethoven, and Chopin, Mangoré is thought to have written roughly 300 works for guitar. Featured on this recording is Mangoré’s “Maxixe” which is based on the Brazilian dance that became popular in Rio de Janeiro in the 1870s, the repeating-note “Cancíon de la Hilandera,” “Aire de Zamba” which is a concert realization of the Argentine dance, the romanza “Confesion” and “Tu Imagen” the charming waltz.
From Argentina to Mexico, Manuel María Ponce was one of the most distinguished and influential figures in Mexican music. As a gifted child, he began composition before the age of ten and was appointed chief organist in his hometown of Aguascalientes at the age of fifteen. Like so many others, Ponce’s chief inspiration was Andrés Segovia and when the two met in 1923, the repertoire for guitar was still very limited. He arranged Tres Cancíones Populares Mexicanas from 1925-26 for Segovia. Jascha Heifetz later did an arrangement (for violin) of the last work in the piece, “Estrellita” and it became so popular that it was included in the 1939 Goldwyn film The Shall Have Music.
Argentine-American guitarist and composer Jorge Morel showcases his affection for David Russell in two works that were written with the guitarist in mind. On “Recuerdos del Caribe” the piece is filled with the flavors and rhythms of the West Indies and it showcases Russell’s handiwork. “Mangoré” is dedicated to the guitarist as a tribute to the late Augustín Barrios Mangoré who shaped both of these guitarist’s lives. The other Morel works featured are the Latin scherzo “Jugueteando,” “Pampero” which shares its title with the stormy conditions that accompany a cold front moving across the plains, the “Pampas,” of Argentina and Uruguay and the “Barcarole,” a traditional song of the Venetian gondoliers.
Even though his career was focused on tango, Héctor Ayala still had a thorough understanding of other Latin American musical styles, as demonstrated by his “Serie Americana,” which closes Russell’s sublime disc of Sondios Latinos, and comprises pieces representative of six South American countries.

"Imagine some crazy exam in which you were asked to put David Russell's music virtues in order of importance. Which would come first? The seductive phrasing? The wide range of expression, using the guitar resources to the utmost? The capacity for colour, sometimes full blooded, sometimes delicate, always perfectly controlled? The seamless legato? The mastery of vibrato and (contemporary opera singers please note) when to use it?
Fortunately, such exams do not exist, and would be a waste of time if they did. You simply accept David Russell for what he is, an artist of the guitar and a unique musician, at home in the clarity of the Baroque no less than the high Romanticism of Tárrega and Barrios. All he lacks is the substantial repertoire that pianists have - imagine what might have happened had Schubert taken the guitar more seriously.

What the guitar does have is the music of South America and the Caribbean, where the instrument has a national status unknown in Europe. Sonidos Latinos is the latest product of Russell's exploration in that huge fecundity, and it yields much characteristic music of generally excellent quality. Ayala's Serie Americana, for instance, is a collection of short pieces representing various countries - a choro for Brazil, a gato and malambo for Argentina, and so on. It is an attractive pattern that occasionally reaches a peak of poetry, as in Guarania (Paraguay): almost Keatsian in its regretful melancholy, it's not something you want to live with for very long, and at 4 minutes it's just about right. The bracing Tonada (Chile) that follows will enable you to face the world again before you run out of paper tissues.
Barrios brings out the best in David Russell. Canción de la Hilandera is an object lesson in tremolo playing, the bass resonant and perfectly balanced. Confesión is treated almost as a period piece, with even a touch of bass-note-first - quite in order in music of this period and style, and rather more convincing than the portamento that I have heard in modern performances of the Elgar Violin Concerto. Tu imagen is a light-hearted waltz, straightforward on the face of it until you notice that Russell gives the bass a more masculine quality than the treble: "Your Image - do you like the picture, dear?" "Not too much, no. My designer stubble is too prominent." The fact that you can imagine this tells you something about the subtlety of Russell's playing. A short story in just over 3 minutes!
Jorge Morel is a composer with whose music Russell has always been on excellent terms, and the music played here is substantial and varied. Recuerdos del Caribe is dedicated to David Russell, and so is Mangoré (Una Danza). I am sure the composer must be happy with these renderings. David Russell is known for getting to the essence of the music he plays and here he is in commanding form.
Colin Cooper
Classical Guitar Magazine