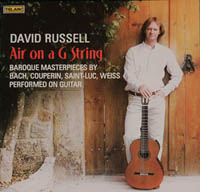 "Guitarist David Russell just keeps getting better and better. He was already a fully formed virtuoso with a clear, warm tone and an effortless technique when he made his major-label debut on Telarc in 1995. And as this 2008 disc called Air on a G String shows, Russell has deepened and mellowed as he's matured. Featuring four works by Johann Sebastian Bach, four by François Couperin, six by Sylvius Leopold Weiss, and an eight-movement suite by Jacques de Saint-Luc, Russell's choice of repertoire is balanced between the well known and unfamiliar, and it is all the more interesting because of it. With his digital independence and his uncanny ability to sustain a legato line on a plucked instrument, Russell's technique remains impeccable. But as he has aged, his interpretations have become more musical and less technical. Russell's Bach — a probing Partita in A minor, BWV 1013; a sublime Adagio/Arioso from Cantata No. 156; a shadowy Pastorale in F major, BWV 590; and a blissful Air from the Suite in D major, BWV 1068 — sounds sympathetic not just to the music's supreme intellect but to its soulful spirituality. Russell's selections by Weiss and the Suite by Saint-Luc are graciously engaging, but better yet are his three selections from Couperin — especially his otherworldly Les Barricades Mistérieuses, which seems to float out of the strings of the guitar. Captured in clear, immediate digital sound by producers Elaine Martone and Maria Jesus Rodriguez, this disc will please technophiles as well as Russell's fans.”
All Music Guide

AN INCOMPARABLE GUITARIST VISITS THE KEYBOARD AND THE LUTE
"Air on a G String" finds David Russell returning to Baroque mode, this time contrasting to great keyboard players - J.S. Bach and François Couperin - with two masters of the lute: Silvius Leopold Weiss and Jacques de Saint-Luc. At first glance, the latter seems the odd man out, having been born a good half century before the other two composers, until you notice he was still plucking merrily away in 1710. three years after the composition of the suite recorded here.
Throughout this fine recital, Russell evokes the sound of lute and harpsichord without ignoring the additional technical and colouristic opportunities afforded him by a modern guitar. These are historically informed interpretations... In the Couperin, Russell's fastidious technique really comes into its own, the style luthé, sharp contrast in tone colour and neatly executed ornamentation perfectly apposite to the music.
Two further works by Bach, the Sinfonia from the Cantata BWV 156 and the beautiful third movement from the Pastoral BWV 590, serve as refreshing interludes during the course of the disc, while a third, the Air from the Third Suite in D major, brings what is yet another outstanding release by this incomparable guitarist to a gentle close.
William Yeoman. Gramophone

“The familiar Air on the G String rounds out this most satisfying recital of works for classical guitar, replete with Telarcs usual rich and clear sonics.”
Audiophile Audition

“In Air on a G String David Russell uses all his well known technique for the Spanish guitar, including his expressive tone production and tastefully delayed cadences, to convey the deeper beauty in the music of Johann Sebastian Bach and his contemporaries. The intellectual and the affective qualities of the music are in perfect balance in these transcriptions, in a way that would have pleased their composers… Russell’s superb musicianship invests it with all its famed expressive beauty.”
Atlanta Audio Society

David Russell’s new release is entitled Air on a G String; Baroque Masterpieces by Bach, Couperin, Saint-Luc, Weiss. These are performances of music by lutenists Silvius Leopold Weiss (1686-1750) and Jacques de Saint-Luc (1616-Ca. 1710) and transcriptions of favorites by J. S. Bach (1685-170) and Francois Couperin (1668-1733).
Musical performances during the Baroque period were approached in much the same way jazz is now; that is, the performer has as much to say about the interpretation as the composer. Most of Bach’s manuscripts have few markings as to time, loudness and phrasings. It is left to the artist to dress the skeleton.
Russell has done a masterful job of providing the ornaments and color for these pieces. He has also given us an extraordinary insight into the history and sometimes the political connections of these composers. The liner notes are rich in detail; Couperin’s family sat on the same organ bench for one hundred seventy three years!
Saint-Luc’s suite “The Capture of Gaeta” marks the victory of his patron, Eugene of Savoy, during the War of Spanish Succession. The final movement, “Caprice en Passacaille,” is a wonderful set of variations over a bass theme with an astounding conclusion.
It is obvious that Russell has studied intently the practice of grace notes common to the Baroque period. His ornamentation is bright and snappy without sacrificing the feeling and sonority that the guitar is more capable of than the harpsichord or lute. Bach’s “Air on a G String” is a complex piece with three parts. The bass is sweet and unhurried, the middle part well-articulated and the melody given its proper ringing against the others.
This is a wonderful album which will both entertain the beginning listener and reward the educated enthusiast.
Masterpieces Mastered, WCPE's Quarter Notes.

IN A STATE OF GRACE
...For its novelty, there is the piece by Bach which gives the name to the recital and the rest of Bach compositions, all of them from magnificent, faithful and at the same time idiomatic transcriptions from David Russell himself. But we also find the delightful suite from the unknown Saint-Luc, forgotten composer and who clearly deserves attention. Little could the old Flemish composer image that, at the beginning of the twenty first century, many would know him thanks to a CD with the unsurpassable version of a great master of the guitar. And, what to say about the hapsichord pieces by Couperin, which sound as full and rich as they would do on the keyboard? It is possible to say as much of the pieces by Weiss, like the sublime Tombeau sur la Mort de M. Comte D'Logy, one of the highlights of the programme, in an interpretation which is a prodigy of sensitivity and musicality (as far as technique goes, it is pointless to refer to Russell, as his command of the instrument is complete). Another hit by Russell to add to the already known and to which more, no doubt, will be added in the future. Total recommendation.
Josep Pascual, Scherzo

GRAMMY® Award-winning guitarist David Russell returns with Air on a G String, baroque masterpieces by Bach, Couperin, Saint-Luc, and Weiss performed on guitar and scheduled for release on March 4, 2008.
With the great strides in the technology of instrument building and the solidification of the modern harmonic system during the late-17th and early-18th centuries, instrumental music flourished during the Baroque period. Russell’s Air on a G String brings together works by Jacques de Saint-Luc and Silvius Leopold Weiss, two of the master lutenists of that era, as well as his transcriptions for guitar of varied compositions by Johann Sebastian Bach and François Couperin.

Opening this recital program is J.S. Bach’s (1685-1750) Partita in A minor (BWV 1013), which was originally conceived around 1720 for unaccompanied flute. This stunning arrangement for guitar by Russell further underscores the beauty of what was originally written as a single line of music. With the complexities of Bach’s music, Russell sets a high standard for other guitarists to follow.

Silvius Leopold Weiss, born in Breslau (now Wroclaw, Poland) in 1686, was the most renowned member of Germany’s leading family of lutenists during the time of Johann Sebastian Bach. Weiss wrote well over eight hundred pieces for lute – more than any other composer – including some sixty solo “sonatas” (really suites in the Baroque manner, comprising a prelude and a series of stylized dance movements), several concertos, lute duets, and numerous independent pieces.

The date of Bach’s four-movement Pastorale in F major (BWV 590) is uncertain – perhaps as early as 1705, when he was organist at the New Church in Arnstadt, or perhaps as late as the 1730s, when he was well established in Leipzig. The work takes its title from the opening movement, which is based on the model of the Italian pastorale, whose gentle, swaying rhythms and sweet melody recall the Italian shepherds who entered the towns at Christmas time to play their rustic pipes before the manger scenes set up at churches and other public places.

The Flemish lutenist and composer Jacques de Saint-Luc was born in 1616 in Ath, twenty miles southwest of Brussels and not far from Belgium’s present-day border with France. Saint-Luc wrote the suite titled La Prise de Gaeta (The Capture of Gaeta) to honor a victory in Italy in 1707 by his patron, Eugene of Savoy. Saint-Luc’s suite includes a traditional series of Baroque dances – Allemande, Courante, Sarabande, Gigue (which, the composer noted, is “à la Manière Anglaise”), Minuet, Passepied – before closing with a march-like Rigaudon pour les Trompettes and a Caprice en Passacaille (Caprice in the Form of a Passacaglia) built on a repeating bass pattern.

François Couperin (1668-1733), nicknamed even during his lifetime “le grand” (The Great), was the most important member of a family of musicians prominent around Paris from the late-16th century to the mid-19th century. Couperin’s Les Silvains (The Woodland Fauns, Book I of Pièces de Clavecin [1713], Ordre 1, No. 8) is one of his earliest keyboard works of the pastoralism that figured so prominently in 18th-century French art. “In form, Les Barricades Mistèrieuses is a rondeau, with a returning refrain; in technique, it is based on variants of the short, repeating bass pattern known as the Romanesca that had been the subject of keyboard and, later, guitar variations since at least the 15th century,” states Richard E. Rodda in the liner notes, “Tours de Passe-Passe (Book IV [1730], Ordre 22, No. 8) is a French colloquialism for “legerdemain” or “sleight-of-hand,” and in Couperin’s playfully effervescent piece indicates the crossing of hands at the keyboard.”

Closing out this incredible program is Bach’s “Air on a G String” from Suite No. 3 in D major, which comes from the second movement of Bach’s Orchestral Suites and became famous as a nineteenth-century arrangement for solo violin.

A GRAMMY® Award winner in 2005 for his CD Aire Latino (Best Instrumental Soloist in Classical music), classical guitarist David Russell is world renowned for his superb musicianship and inspired artistry, having earned the highest praise from audiences and critics alike. In recognition of his great talent and his international career, he was named a Fellow of The Royal Academy of Music in London in 1997. In May 2003 he received the great honor of being made “adopted son” of Es Migjorn, the town in Minorca where he grew up. Recently the town named a street after him, “Avinguda David Russell”, as acknowledgement for his musical career. In November 2003 he was given the Medal of Honor of the Conservatory of the Balearics. In May 2005 he received an award from the music conservatory of Vigo, culminating with the opening of the new Auditorium, to which they gave the name “Auditorio David Russell.”

After winning the GRAMMY® Award, he received the silver medal of Nigrán, the town in Spain where he resides. During his studies at the Royal Academy, David Russell won twice the Julian Bream Guitar Prize. He later won numerous international competitions, including the Andrés Segovia Competition, the José Ramírez Competition and Spain’s prestigious Francisco Tárrega Competition. Upon hearing him playing in London, Andrés Segovia wrote: “My congratulations on your musicality and guitaristic technique."