Photographer Barry Beckett sent me a couple of old photos of Dennis Milne and me playing together. The images brought back old memories of the early 70s in London, both of us as students at the Royal Academy of Music and later as aspiring professionals, struggling to make a living. 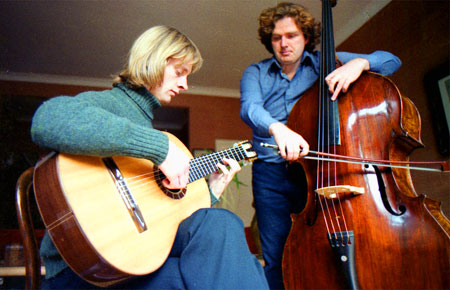 Dennis was from Scotland and took me under his wing as a fellow Scot. He loved many sports and started me playing tennis and other sports. Through Dennis I ended up playing in some London orchestras, but in the football team.
We played many types of music together, including Scottish music, and often played small concerts in schools, local community centres, and anywhere else people would listen to us. I remember enjoying the concerts we did for schools for the mentally handicapped. (here is a poster they drew for one of our concerts). 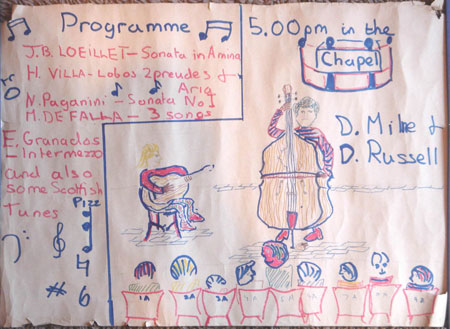 Dennis also spent many hours composing music both for the double bass and for other instruments. I played his guitar concerto in London several times and also recorded it. We often played his piece for Bass and guitar "Picture of Nobody". He wrote another beautiful piece for solo Double Bass called The Wanderer.

On the right: These photos are on the road during one of our tours in country houses of Scotland.

Unfortunately for all of us he died in a fatal car accident in the United States. We all lost a dear friend and the world of music lost a promising composer and accomplished performer. He was a person who brought out the best in those around him and I will always be grateful to him for showing me the ropes in London.

Dennis re-ignited my feeling of being Scottish and some years ago I recorded and published many celtic arrangements (music from Scotland and Ireland) on a CD called Message of the sea. The arrangements on the CD are dedicated to Dennis as I would never have done the first ones had it not been for his inspiration.